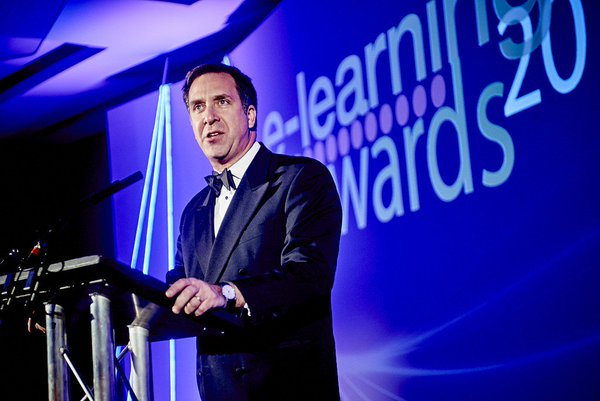 On the second day of the 2017 International Conference on E-Learning in the Workplace (ICELW), which took place at Columbia University on June 14 to 16, Donald H. Taylor opened the day with a keynote surveying the current state of the eLearning field. Donald H Taylor is a longstanding veteran of the learning, skills, and human capital industries. His background includes extensive work in training and serving in director and vice-president positions in the software industry. Since 2010, he has been chairman of the Learning and Performance Institute. Taylor also edits Inside Learning Technologies Magazine.

Taylor started his talk by asking the audience, “What Has Changed in Your Work Over the Past 5 Years?”  The responses were generous and diverse. While most audience members agreed that the most notable changes have entailed the arrival of new delivery formats and tools to track user experiences, other audience members pointed to the roadblocks along the way. Taylor agreed that economics, entrenched habits, and calcified learning and development departments are all factors that continue to slow change and prevent training from evolving more quickly.

Donald H. Taylor on the Necessity of Change

As Taylor noted in his ICELW keynote, over the past 500 years, we’ve gone from a time when information was so valuable books had to be chained to the walls of libraries to our current age in which reams of data circulate for free and can be accessed anywhere and anytime. But as Taylor notes, while information may be free, it is also highly valuable. After all, information is now recognized as an asset that can generate greater assets. Despite this massive shift in the status of data, however, change in education and training has been slower than one might expect. Classrooms, for example, look nearly identical to the classrooms students occupied a century ago. But change is no longer optional. To remain competitive, we need to adapt, but how?

The Mind and Adaptation

Are our brains changing as a result of new technologies? According to Taylor, not necessarily. “The human brain has been around for a long time,” he observed and it hasn’t really changed all that much. How have humans survived? According to Taylor, we have survived and thrived because our brains are able to adapt. Indeed, adaptation is what we are good at, but some situations prompt adaptation more than others. Taylor suggests that the mind adapts in relation to at least six different forms of stimuli: threat/shock, people, movement, change, repetition, and trying to remember.

The Role of Educators and Instructional Designers

This brings us to our current role as educators and instructional designers. Is it still to be teaching people in classrooms? Not necessarily. According to Taylor, “Our role is to help the people we our responsible for not become victims of obsolescence.” This shouldn’t be difficult, however, since “The mind’s real strength is not repetition but being creative.”  Here, Taylor’s advice is particularly insightful.

First, Taylor argues observes,”We need our memory to have brilliant thoughts–we don’t need it to add things up but to make connections.” On this basis, he maintains that it is time to let machines do what they are good at (e.g., computation of large data sets) and to free humans up to focus on more creative endeavors. Notably, as Taylor reminded the ICELW attendees, “Computers don’t have an ‘aha moment’–they can’t always read context,” and it is on this basis that only certain types of tasks will likely ever be replaced by forms of artificial intelligence.

Second, he emphasized that as educators, “Our future role will mean stepping away from content production to become facilitators. We need to step back from being course production machines and start helping people learn themselves.” What might this look like? In a workplace setting, it may mean shifting from a course delivery model to a user toolkit model (e.g., creating a large archive or clearinghouse of learning tools that employees can access to scale up their own training as required).

Finally, Taylor emphasized the need to do a better job as educators and trainers in sharing resources and choosing the right tool for the right job. Rather than design every course from scratch, look around the world for existing resources: “Someone has certainly done it already–you don’t need to design a new course every time.”  Taylor also emphasized the importance of selecting appropriate tools, even if it sometimes means choosing something that is tried and true over an exciting new format.

So what has changed and not changed in the eLearning field over the past twenty-five years? If one appreciates that current best practices reflect an accumulation of knowledge over time, one might conclude that everything and very little has changed. The future of eLearning will rest on our ability to carry forward what is already working well while innovating to discover future best practices.

How Does U.S. News Calculate their College Rankings?