For the average student, college represents a bureaucratic challenge on a scale that many have yet to encounter. That is a problem that chatbot developers like AdmitHub seek to address. On February 16, the Boston-based company announced it had raised a Series B funding round worth $14 million.

Update 2/18/21: After this story was published, AdmitHub announced that the funding round had been raised by participating parties to $16 million.

In a statement, AdmitHub said it planned to use the funds to “tap emerging technologies that address the most critical challenges faced by students and institutions.”

The round was led by previous investor Rethink Education and was joined by ECMC Group and the Kresge Foundation.

According to Crunchbase, the latest round brings AdmitHub to a total funding of roughly $30 million. Its previous Series A took in $7.5 million after late support from Salesforce Ventures and Google’s Assistant Investment Program, the latter of which supports companies that incorporate Google’s voice technology into their offerings. The original Series A was led by University Ventures and joined by Reach Capital, Relay Ventures, and Rethink.

Don’t know how to communicate with your #GenZ students? AdmitHub has found a way to Support Students With #AIChatbots.

AdmitHub seeks to provide students with an easy and scalable means to seek information. Its services can also send students ‘nudges’—or reminders—about upcoming deadlines. AdmitHub’s machine learning system has also been designed to learn as it goes. It begins to naturally tailor its responses to each respective student body it serves.

The company partnered with Georgia State University (GSU) in 2016 to put its chatbot to work. According to a study conducted by independent academic researchers, AdmitHub’s chatbot significantly reduced ‘summer melt.’ This term refers to students who are accepted and indicate they intend to matriculate, but fail to show up for their first day of class. At GSU, this phenomenon was reduced by roughly 30% after implementing AdmitHub.

“AdmitHub’s technology and approach exemplify the thoughtful application of AI to solve the most pressing challenges in education,” said Matt Greenfield, Managing Partner at Rethink Education, in a statement. “Even amidst the turmoil of the past year, artificial intelligence has played a transformative role in institutions’ efforts to communicate quickly and effectively, in ways that improve access and retention at scale.”

Since launching in 2014, the company says it has served over 3 million students. It has contracted with other institutions like Wayne State University, West Texas A&M, and Allegheny College.

“The past year has reinforced the reality that new challenges will always be around the corner for colleges and universities,” said Drew Magliozzi, Co-Founder and CEO of AdmitHub, in a statement. “Partnering in close collaboration with schools around the country, we’re building an empathy engine for higher education that will enable institutions and their students to navigate even the biggest and most unexpected obstacles.”

AdmitHub has announced it will change its name to Mainstay at an undisclosed time in the future.

Correction 2/16/21: A previous version of this article incorrectly named Texas A&M as a partner of AdmitHub. It should have read West Texas A&M.

The Ice Is Melting for Hybrid J.D. Programs 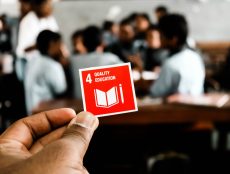