For the fourth consecutive year, the Trump Administration and Secretary of Education, Betsy DeVos, have proposed substantial cuts to the U.S. Department of Education’s budget. Unfortunately, inequality is one of the biggest risk factors to economic and political stability. The threats that this poses to student performance is likely to have long-term consequences for equality of opportunity, social mobility, and income. As the Associate Vice Chancellor for Student Success at North Carolina Central University, Ontario Wooden is concerned about what budget cuts to education will mean for both students and teachers during the COVID-19 pandemic. According to Wooden, these cuts will have a deep impact on students across the country.

The Issue With Standardized Testing

Over the past few decades in the United States, a number of education reforms have taken place, designed to measure and improve student learning outcomes, and hold teachers accountable for student performance. Ontario Wooden explains that some of these well-intended programs include No Child Left Behind, Race To The Top, and Every Student Succeeds Act. In these models, a vision for what successful students look like is narrowed down to one metric alone: test performance. This one-size-fits-all approach micromanages the experts, the teachers we trust with the job of adaptability, the flexibility to assess their situation, and the ability to make empowered decisions. Why has this happened? Ontario Wooden asserts that it was all done in the name of accountability. However, prioritizing student performance based on standardized testing alone has had a negative impact on the overall quality of education. Test performance is now directly tied to both school funding and the evaluation of teachers and administrators.

Unsurprisingly, a lot of funding is attached to testing, and if you do not perform well on testing, you are at risk of losing funding. Historically, schools receive nearly half of their funding from the state. However, with businesses shuttered in response to the COVID-19 pandemic, and unemployment rates already nearing 15% (well above the 10% peak during the Great Recession), state income and sales tax revenues are crashing. But unlike the federal government, most state governments are required to balance their budgets, resulting in many governors and state lawmakers now racing to implement austerity measures, including to school funding. Schools that were already fighting for operational funding were the first to feel the impact of these cuts. Unfortunately, Ontario Wooden offers that there is no shortage of examples.

In early May, Ohio Governor Mike DeWine unveiled $300 million in K-12 budget cuts, and that was just through June 30th. Prior to that, Ontario Wooden reports that Georgia’s governor asked state education leaders to prepare for a 14% cut in funding starting in July. In Michigan, a top Republican in the State Senate warned superintendents that they could see their budgets being slashed by as much as 25%. Ontario Wooden explains that in most cases, these budget cuts will likely affect vulnerable, low-income communities the hardest. In addition to receiving roughly half of their income from the state, school resources also come from local funding, largely from property taxes. But, of course, differences in property wealth between districts have created decades-old disparities that many states have tried to alleviate through state funding—creating a vicious cycle when state funding is cut. These cuts not only impact students and the quality of their education, but educators as well.

A report from the Economic Policy Institute highlights that more public education jobs were lost in April than during the Great Recession. Between 2008 and 2010, the United States lost roughly 120,000 teachers, and more than a decade later, we still do not have the number of public school teachers we did in 2008. There is evidence to suggest that the impact of COVID-19 on education could be twice as bad as the Great Recession. Staff cuts, for example, have already skyrocketed.

As staff salaries make up a large portion of education budgets, Ontario Wooden alerts us that chronic underfunding is likely to result in teacher layoffs and stagnant teacher salaries. According to one report, if every state made a 15 percent cut to state education funding, there would be an estimated loss of about 300,000 teacher jobs nationwide, or slightly more than 8 percent of the teacher workforce. Fewer staff in schools does not just mean bigger classes, it means fewer adults available to kids—adults who can help students through a tough academic year, changes at home, social isolation, or anxiety and depression.

Unfortunately, during a pandemic, stricter measures for safety will mean bigger budgets—budgets that are being cut on a daily basis. Some low-resource communities may find safety guidelines difficult to adopt due to a lack of funding. Ontario Wooden is that is emphatic that federal funding and state subsidies are crucial for low-income communities.

The CARES Act Was Not Enough

The $2 trillion coronavirus relief bill, known as the CARES Act, provided K-12 schools with more than $13 billion in emergency funding to help stabilize education. This investment, however, falls short of what is needed. Various education advocacy groups have put forward estimates, ranging from more than $100 billion to about $250 billion just to stabilize state and local K-12 budgets. Ontario Wooden is hopeful that this would close the gap in remote learning, provide students with mental, physical and academic supports, and provide a safe school environment for educators and students alike.

Money matters in education, and a lack of it can harm students and educators—especially in the middle of a pandemic. In addition, this harm will be unevenly distributed. The inequality in America’s funding system for K-12 is already pronounced, with some states spending far less on students than others, and where funds fail to direct resources to schools and students that need them most. 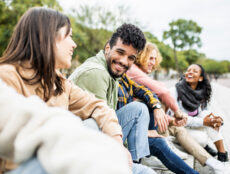