At CanvasCon 2020, Instructure is showcasing deeper integrations with Microsoft services, enhanced platform features, and a new Canvas Certified Teacher program. Beyond the product updates that one would expect at a tech conference, the North American leader in the learning management system (LMS) market is also hoping to sweep up some of the dust that has only begun to settle after a chaotic year.

The event goes live on October 15 for Canvas stakeholders around the world, with events conforming to Sydney, London, and Salt Lake City time zones. Keynote speakers include LeVar Burton and Sal Khan.

Canvas Experienced a Massive Surge of Traffic in April, and an Even Bigger One in August

When the COVID-19 pandemic broke out in the U.S. last spring, Instructure managed to accommodate a peak of 2.2 million concurrent users on their platform. But when many K-12 and college classes came back to school this fall, the platform had to deal with activity from over 6 million simultaneous learners. In late August and early September, Canvas users across districts and states reported outages and slow services.

As Canvas Senior Director of Product Ryan Lufkin explained over Zoom, the surge occurred mostly in the K-12 space.

“With higher ed, you had adoption rates of 40% to 60% and up to 80%,” Lufkin said, referring to usage before the pandemic broke out. “Going fully online pushed that up to 98%, which was definitely a big spike. But a lot of K-12 institutions weren’t using an LMS at all. Even if they were using Canvas, they had low adoption rates. Then everyone got close to 100% adoption over the course of a few weeks.”

The company is confidant that things are now running smoothly and will continue to do so. Canvas counts roughly 30 million global users, but the company declined to say how much growth they have experienced this summer. In the U.S., fourteen statewide education systems now use the LMS.

Instructure announced an integration with Microsoft’s Teams videoconferencing service in March. At CanvasCon, the company is unveiling an enhanced Learning Tools Interoperability (LTI) application that will further the integration. Teams will soon be a default feature in Canvas. Users will be able to schedule, edit, and join meetings from the platform. They will also be able to record with unlimited storage.

The two companies are working to expand this integration to allow for features such as quizzing and assignments to run simultaneously during videoconferences.

“This is a wholly unique and much more in-depth LTI that’s been developed by both Microsoft and Canvas together,” Lufkin said. “It allows much deeper integration and seamless inclusion of all of Microsoft tools directly within courses themselves.”

Over the coming months, Instructure expects to release further Microsoft integrations, including functions linking the platform with OneDrive, Immersive Reader, and the 365 software suite.

In addition to the Microsoft LTI, Instructure unveiled a new teacher professional development program on October 14. Canvas Certified Educator comprises four core courses and electives intended to help teachers make the most out of the LMS. Core courses include Foundational Frameworks, Engagement Strategies, Personalized Learning, and Transformational Practices. Two tracks are available—one for higher education and one for K-12.

Wanting to take your Canvas skills to the next level?

BIG NEWS: today we are pleased to announce the Canvas Certified Educator Program.

For more information on becoming a Canvas Know It All, visit the website: https://t.co/GlkaqxWT3r pic.twitter.com/gxVvEQVaHj

“Academic freedom is always a hot topic within the education space. Ten years ago, that meant, ‘Let me use whatever LMS I want.’ So you had a school supporting five or six different LMS,” Lufkin said. “While we are never going to be prescriptive about how teachers teach, we want to create an environment that allows them the flexibility to teach the way they want to. We have seen educators, especially those who are newer to the LMS, saying, ‘Look, you need to give me a little bit more information. Don’t just say, ‘Oh, yeah, that does that.’ Tell me how it does that. Tell me how I can make it do that.”

Rebuilding After a Dramatic Acquisition

Throughout the pandemic and the construction of these new features, Instructure was operating under new ownership and leadership. The formerly public company was acquired by the private equity firm Thoma Bravo in March. The initial offer met with significant shareholder opposition. Former CEO Dan Goldsmith stood to benefit substantially from the deal. Some shareholders alleged that he was seeking to push the acquisition through at an undervalued price without doing his due diligence to shareholders. Goldsmith resigned from his post in February.

During the private equity buyout process, Instructure also laid off a significant portion of its employees. Following the acquisition, as is typical of buyouts, the company laid off an additional 150 workers. The combined cuts totaled roughly 20% of its full-time workforce, according to edtech consultant Phil Hill.

The second round occurred at the end of May, well into the outbreak of COVID-19 and during the spring semester surge in demand. Lufkin described this as a realignment.

“I think it gave us some focus that really has helped us,” he said. “When you look at layoffs as a whole, they’re always scary. But we really are moving resources to the areas where we need them most. I think that’s been positive.”

Since the layoff rounds, Lufkin also noted that Instructure has begun to rehire. 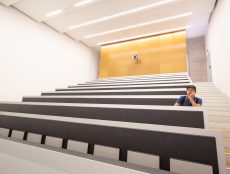