Over the past five years, MOOCs have gained ground around the world as a way to bring education to everyone. Regardless of one’s location or financial situation, MOOCs profoundly democratize higher learning. Unfortunately, new data reveals that MOOCs may not be as accessible as initially expected.

Between 2012 and 2015, more than 25 million people enrolled in MOOCs worldwide. While learners from educated and affluent countries enroll in and complete MOOCs at a relatively high rate, in less privileged nations, fewer learners enroll in MOOCs and even fewer complete their courses. Some early studies, including one 2013 study published by researchers at the University of Pennsylvania, found that MOOCs ironically appear to be making the already educated more educated while leaving less privileged populations behind. One survey found that among nearly 35,000 MOOC students, the vast majority already had at least one university degree (79% had a bachelor’s degree and 44% had at least some graduate education). These statistics raise a critical question: What can be done to better promote educational equity in MOOCs?

A new MIT and Stanford University study, “Closing Global Achievement Gaps in MOOCs,” has discovered that MOOC designers and instructors can have a profound impact on learners’ experiences and levels of success across cultural backgrounds and identity categories. Traditionally, researchers assumed that learners from less developed countries were failing to complete MOOCs for a single reason: Low levels of English-language proficiency. This assumption was based on the fact that most MOOCs offer instruction in English and many foreign learners lack the English-language proficiency needed to excel in English-language instructional environments. This assumption, however, turned out to be incorrect. Researchers at MIT and Stanford discovered that “social identity threat” not language barriers may be to blame for MOOCs failing to serve the needs of learners on a global basis.

Social identity threat happens to individuals when they feel the communities in which they are engaged are negatively evaluating their status. Girls and women in STEM programs, for example, often perform lower than boys and men not because they know less but rather because they like they are being negatively judged. A subset of social identity threat is stereotype threat. In this case, individuals respond by feeling deeply insecure about their own abilities.

In the MIT and Stanford study, it was found that something as simple as a 10-minute initial writing exercise can double completion rates for at-risk learners. In the study, which appeared in Science on January 20, researchers reported: “Social identity threat appears to be a barrier to performance in an international learning context, even an online environment with little social interaction…Psychological and learning sciences can help turn an accessible educational experience into an equitable one.”

To promote educational equity in MOOCs, the MIT/Stanford team of researchers carried out two experiments in which random learners in MOOCs were asked to complete either a writing exercise reflecting on their personal values and the link to course materials or a reading exercise, which presented testimonials from other learners who initially concerned about their sense of belonging in the class. As it turned out, both the writing and reading exercises helped to raise the completion rates of students from less developed nations. Oddly, however, the exercises appeared to have the opposite impact on learners from developed countries (e.g., the United States and United Kingdom).

Future Directions for Research and Action

MOOCs may no longer be the flavor of the month in the world of eLearning, but they remain a strong trend that is likely here to stay. The populations that arguably have the most to gain from MOOCs are populations living in developing nations where access to high-quality education often remains limited. To promote educational equity in MOOCs, it is imperative that social identity threat and stereotype threat are addressed. The good news is that as demonstrated in the MIT/Stanford study, something as simple as a short writing or reading activity at the beginning of each course can have a notable impact on completion rates for at-risk learners. 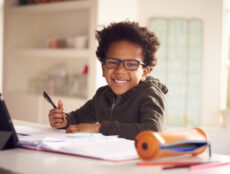